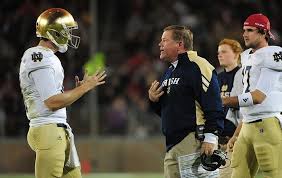 Notre Dame falls to Stanford 27-20 on Saturday night in Palo Alto thanks in part to two HORRIFIC Tommy Rees interceptions. Yes I know, I am shocked too. Notre Dame’s defense was manhandled for the majority of the game giving up over 250 yards on the ground. The Irish had their chances to score the tying touchdown late in the game but both chances were literally thrown away by Tommy Rees. Two god awful interceptions sunk the Irish in the end but more red zone woes on offense surely didn’t help the case. Notre Dame drove into the redzone twice in the first half and could only manage 6 points. That’s just not going to cut it against a team like Stanford. Notre Dame only managed 64 yards on the ground which forced Brian Kelly to put the game on Tommy Rees’s shoulders. We should have all known how that would end. Rees only managed to throw 199 yards to go along with his two interceptions in his final regular season game in an Irish uniform. Kevin Hogan also threw for two interceptions however, Stanfords defense was able to hold the Irish to avoid allowing the game to be tied in the fourth quarter. The Irish fall to 8-4 on the season and look destined to be headed to the Pinstripe Bowl against Rutgers. Yes Rutgers. Ouch. Check back tomorrow for a full recap of this game and all the other madness around the country this weekend.