Notre Dame gets clicks. We all know that. And so do journalists who write stories on Notre Dame. People either love Notre Dame or they hate them. There are not really too many in-between the two sides, at least that I have encountered, and the sports journalism community knows and takes advantage of this. Unfortunately the majority of the time these journalists focus more on bashing Notre Dame in their pieces than actually presenting facts.

By now everyone has been made very aware of the ALLEGED academic fraud that has out Notre Dame in the news in the past week or so. I say “alleged” because nobody has been punished for any sort of wrong doing or kicked out of school. The players in question, Keivare Russel, Ishaq Williams, Kendal Moore, and Davaris Daniels, are being withheld from football activities while the investigation is completed. But hey don’t try telling the sports media that. Writers like Pat Forde, Stewart Mandel and Bruce Feldman (who blocked me on twitter yesterday after I told him he was reporting false information) have taken the full opportunity to trash Notre Dame through their respective media platforms even if it means reporting false information and then refusing to change it when Notre Dame blatantly refutes what they claim. I’ve read all of their articles and to say they have a huge hate boner for Notre Dame would be a massive understatement. I’m not going to post the links to the articles on here because I don’t want to give them clicks but I am sure if you are into pouring acid on your eyes you can go find them on google.

All of this should really come as no surprise to anyone though. This same thing happened last year with the whole Manti Te’o fake girlfriend story that Deadspin decided to report because they were “80% sure”. Hell even an alumnus of the university who many of you know as “The Alum” sold out just to make a name for himself by providing information that also turned out to be false. We have been accustomed to this sort of thing over the past few years as the Notre Dame Football program has been slowly on rise again since Brian Kelly arrived in South Bend. Its part of being a Notre Dame fan. We live with it. But its one thing to write false information. It’s another to try to find said “information” on a message board of a Rival of the Irish. And that’s exactly what I found.

Meet USA Today Reporter Josh Peter. Have you heard of him before? Probably not. I hadn’t either before I googled him to find some of his work. Most of his work lately has been about the whole Donald Sterling thing so I guess he wanted to try to make his mark by joining in on the bashing of ND. But he decided to take it a step further. This actual professional reporter decided to go and post on MGoBlog, a pretty well-known skunk bear website, asking Michigan fans if they had any dirt on Brian Kelly. Don’t believe me? Don’t worry. I took a screen shot of the post. 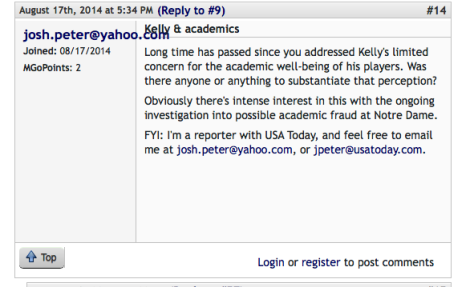 Now the thread originally began in 2008 when the initiating poster was asking the board if anyone had any information about “Rumors” of character issues or lacking concern for academics. As to be expected but a little surprising coming from Michigan fans, none of them were able to find anything to substantiate the “rumors” and many of the posters who replied to the thread actually showed respect for BK, but of course this was before he was hired by Notre Dame so I’m sure they have all changed their tune. The thread had been left for dead since 2008 until Mr. Peter stumbled upon it and decided that trying to get information on a college football head coach from a rival’s fan base was a good idea. After reading this I was pretty irked. Yes I know journalists have to get their information from somewhere, but I mean come on. Are you REALLY going to try to find dirt on a Notre Dame football coach from Michigan fans? REALLY?!? This is the exact reason why people are really starting to hate journalists.

Now I wanted to tell myself that this couldn’t actually be a real USA Today reporter. I really had a hard time believing that a professional reporter for a media organization with as much esteem as USA Today would actually do this. So I decided to send him an email claiming I had some “information” he may be interested in to figure out if he was actually legit AND to screw with him for a bit.

At first I received no response for almost a day and figured it was just some internet troll that found some reporters info on the web. However right when I was about to give up I received an email from him saying he was interested and to contact him.

I was at a crossroad at this point. I could just let the whole thing go or I could have some fun with it and see how much this guy would take the bait. For those of you that know me this was an easy decision. At this point I had some help from some twitter followers on what exactly to tell this guy. I obviously was going to tell him false information that is in no way at all true but I also wanted it to seem a bit believable in order to see how long he would think it was legit. So after some twitter input and a couple laughs I sent him this.

Now keep in mind. As far as this guy knows, I am a Michigan fan since I received his contact information from a Michigan blog. Also to be noted is that my email account logo is the Down the Tunnel logo WHICH CONTAINS SHAMROCKS IN IT. I also asked if I would receive any compensation for my information. You would think that those two bits of info would be enough to tip this guy off that something wasn’t right. Well apparently not. Because he got back to me fairly quickly stating he was very interested in what I had to say. We exchanged a few more quick emails in which I kept asking him if my identity would remain anonymous. He finally replied with this

I couldn’t stop laughing. The guy really wanted to talk on the phone! I decided to let him sit for a couple of days. I initially said I could talk the following day but then didn’t get back to him until yesterday. At first I didn’t think I was going to actually call but I couldn’t resist. I had some questions I wanted to ask him and I wanted to further confirm that this guy was actually a USA Today reporter because while I was pretty damn sure he was from our email conversations, I wanted to be 100 percent sure.

So I called this guy up this morning. First things first was that he was indeed a legit reporter. First goal completed. During the conversation I asked him what brought him to MGoBlog in which he responded that he that he found it searching Google for “Brian Kelly” and “Academic Fraud”. I than asked him how many responses he received from his post. This is where all of you Irish fans can start giving yourself a round of applause. I’m proud of you. He told me that he had received many responses from Irish fans and many of them were vulgar in nature. Even more hilarious was that he was dumbfounded on how Notre Dame fans could have found his post on a Michigan blog. At this point I almost lost it on the phone and thought I was going to bust out laughing and the jig would be up. Apparently someone doesn’t know how the internet works.

This is about as far as the conversation went. I told him I had another call and to give me a minute and I hung up. The last thing I wanted to do was bust out laughing while on the phone with him. I also didn’t want to feed this guy any more bogus and completely idiotic comments because it seemed like he may have actually bought it and as funny as that would have been if he would have actually written something (I actually laughed out loud multiple times just thinking about it), I remembered how many dumb idiots out there believe pretty much all the hate that is written about Notre Dame by others.

I’m still a bit lost for words as to what this guy was thinking and how he thought that getting get dirt on Notre Dame from a Michigan blog would be a good idea. Saying that anything he would have gotten would have been unbelievably biased is understating it. But obviously he either didn’t know or didn’t care. Either way not the smartest move on his part. Hopefully he will find out he was duped because I honestly don’t think he knows yet since he emailed me back while I was writing this that the connection on our call was lost and to call him back when I could. All I can do it laugh and picture his face once he knows it was all a joke 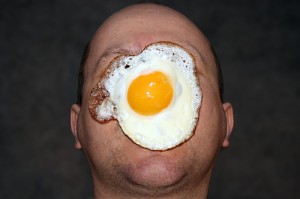 I just wonder what the media will do next?

4 thoughts on “Journalism Really Has Hit a New Low”