On this weeks show we talk about the newly released College Football Playoff Rankings and what Notre Dame needs for the playoff. We also previewed the game with Navy this weekend as well as other key games that have implications for the Irish.

Its finally time to get back to actual football. Since the heart breaking and gut wrenching last second loss to Florida State two weeks ago, Irish fans have been without Notre Dame football and instead had to deal with the incessant talk about polls for a playoff that are still over two months away as well as Justin Brent’s encounter with porn star Lisa Ann over fall break. Enough of all that. Its time to get back to the game played on the field. Notre Dame travels to Maryland this week to take on the Midshipmen of the Naval Academy at FedEx Field. The Irish enter the contest with a 6-1 record and ranked 10th in the College Football Playoff Rankings while Navy brings in a 4-4 record and a two game winning streak. Notre Dame will look to put the loss to Florida State in the rear view mirror and turn their focus to the remaining five games on the schedule as they try remain in the playoff picture. The Irish are by far the better team in this matchup with Navy, but as we all know the Naval Academy has played very well against Notre Dame in the last few years and the triple option attack used by Navy is tough for any defense.

When Brian Kelly first arrived at Notre Dame, everyone was excited about the offense that he would bring with him to South Bend after his success at Cincinnati. However in his first couple seasons, the offense did not live up to the expectations for a variety of reasons, most importantly the quarterback position. This season the offense is FINALLY playing to level we all expected. After looking very impressive during the first half of the season, the offense looked like it had put it all together against Florida State and the task now is to maintain that level of play. The Irish should be able to continue to build on their continued success on offense this week with Everett Golson at the helm going against a Navy defense that has struggled this season giving up 27.6 points per game ranking them 75th in the nation in scoring defense. Navy also ranks 75th nationally in rushing defense, giving up 170.9 yards per game on the ground which should allow for the Irish’s newly minted “feature back”, Tarean Folston, to continue to shine. Since Notre Dame went to Folston as the feature back the Irish are averaging 186.5 yards on the ground per game which is 25 yards more than their season average of 162.4. The Irish should be able to continue to have success on the ground this week.

Navy’s passing defense is not much better than their mediocre at best rushing defense. The Midshipmen are giving up 242.9 yards through the air per game and they have not played an offense with a passing attack anywhere near as dynamic as they will see against the Irish on Saturday night. The Irish are averaging 285.1 passing yards per game ranking 29th nationally. Everett Golson played arguable the best game of his career against Florida State and he should have a field day throwing to wide open receivers all game long. Will Fuller speed is going to be very difficult for Navy to slow down, and Corey Robinson is quickly becoming a huge part of the Irish offense. Expect both to have great games as the Navy secondary will be unable to slow them down. 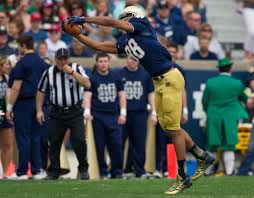 The biggest challenge for this game is for the Irish defense as they go up against the dreaded triple option attack that we have all grown to despise. Navy is bringing the nation’s leading rushing attack into this matchup averaging over 350 yards per game on the ground. However the Midshipmen rushing game will face their toughest test against the Irish, which is only allowing 102.7 yards per game ranking 12th nationally in rushing defense. The Irish front seven has continued to improve all season long with stellar performances by Jarron Jones, Issac Rochell, and Andrew Trumbeti along the defensive line and Joe Schmidt and Jaylon Smith in the linebacking corps. While Navy’s rushing stats look impressive on paper, it is important to point out that at least one reason why their yards per game is so high is because running the ball is the only thing the Navy offense does. The Midshipmen rank second to last in passying offense averaging only 91.6 yards per game. The Navy quarterback Keenan Reynolds is really just another running back in their offensive attack and anytime that the Irish can force him to throw is a win for the defense. It will be interesting to see Brian VanGorder’s game plan against the option as he has admitted to not having face the option for years. Notre Dame is bigger, stronger, and faster than Navy and as long as the Irish defenders maintain their assignments, they should be able to slow down the triple option and force a few turnovers.

This is probably one of the worst Navy teams that Notre Dame will have faced during Brian Kelly’s tenure, including their 2012 team that lost 50-10 to Notre Dame in Ireland. Keenan Reynolds is a very good player however they are missing the talent at fullback and tailback that they have had in the past. Teams like Air Force have been able to hold Navy to 21 points this season, so their is no doubt in my mind that the Irish defense will be able to stop the triple option. Notre Dame needs to start blowing out the remaining teams on the schedule this season in order to stay in the playoff discussion and that starts this weekend. Irish fire the torpedo’s and sink Navy. Notre Dame 49 Navy 17

Other Games Around the Country

3 Auburn at 4 Ole Miss- This game is a playoff eliminator. Both teams enter the contest with a loss and I highly doubt that a two loss team will be making the playoff. Ole Miss is strangely ranked 4th in the playoff rankings after losing to a mediocre LSU team last week and it looks as if the Rebels were exposed in Death Valley. While they may have a very good defense, their offense is not that good. Auburn is an overall better team with a better coach. The dream in Oxford ends this weekend. Auburn 28 Ole Miss 21

7 TCU at 20 West Virginia- TCU completely embarrasses a really bad Texas Tech team last week dropping 82 points on the Red Raiders. The Horned Frogs have looked very impressive all season minus the 4th quarter against Baylor. West Virginia however has also played very well as of late with the Clint Tricket to Kevin White connection. TCU has looked really bad on defense at times this season and playing in Morgantown is no easy task. For the second time this season, it will be couch burning time for the Mountaineers. West Virginia 45 TCU 41

Notre Dame is not playing this weekend, but there are some really good games to watch this weekend as we all wait to see where the Irish will play their bowl game. Its conference championship week and there are some really good games that have huge implications on the National Championship game as well as the other BCS bowl games. What makes the games this weekend even more interesting, is that there is a very real possibility that when its all said and done, there will be NOT be an SEC team in the championship game which will make everyone not living in the southeast very happy.

20 Duke vs. 1 Florida State- Duke has been one of the surprise stories in college football this season. For a school that is known as a basketball school, the Blue Devils were able to win 10 games and earn a spot in the ACC championship game. That’s the good news. The bad news is that Duke has to play Florida State. The Seminoles are playing for a spot in the National Championship and will have Heisman favorite Jameis Winston as news broke today that he will not charged in the sexual assault case. Florida State has an insane amount of talent on both sides of the ball. Their offense has been rolling for the majority of the season and its not going to stop this weekend. Florida State 45 Duke 14

10 Michigan State vs. 2 Ohio State- Besides the SEC championship game, the Big 10 title game is one of the best games on the slate for this weekend. Its a game that puts Michigan State’s top notch defense against the Buckeye’s explosive offense. Ohio State has one of the best rushing attacks in the nation behind Carlos Hyde and Braxton Miller but they are going to have a tough challenge running on the Spartans front 7 who have been outstanding against the run all season long. This is going to be a very close game and probably low scoring but Michigan State’s offense has been the weak part of this team all year and this weekend it will cost them again as Ohio State will pullout a victory en route to the Nation Championship. Ohio State 21 Michigan State 17

5 Missouri vs. 3 Auburn- After two straight miracle games, Auburn finds themselves in the SEC championship game, only one season removed from a 3-9 season and the firing of Gene Chizik who lead Auburn to a National Championship. Auburn has found their success in running an offense that is very similar to the Cam Newton days. The Tigers are one of the nations best rushing teams and were able to continue their success in rushing the football against Alabama’s stout defense last weekend. Missouri is going to be another tough opponent for Auburn. Mizzou’s only loss came to South Carolina without their starting quarterback James Franklin, who was out with a shoulder injury. Mizzou also has a tough defensive front, however I don’t think they are better than Alabama. If Auburn runs the ball well again, they should win. Auburn 31 Missouri 21

17 Oklahoma vs. 6 Oklahoma State If not for a very bizarre loss to a horrid West Virginia team, Oklahoma State would be playing for a shot at the National Championship. The Cowboys have been known for their high octane offense under Mike Gundy and this year is no different. The defense for the Cowboys has also played above expectations this season, with their best game being against Baylor. Oklahoma has switched from Blake Bell to Trevor Knight at quarterback and have had trouble finding an offensive identity this season. The Cowboys are playing for the Big 12 championship and a trip to the Fiesta bowl. They should have no trouble this weekend. Oklahoma State 38 Oklahoma 24

11 Arizona State vs. 7 Stanford- Another example of where good defense meets good offense in this years PAC 12 Championship. Arizona State has an outstanding offense that is led by their quarterback. Since the Sun Devils lost to Notre Dame, they have bounced back and gotten their offense clicking on all cylinders. Stanford brings a tough defense to this matchup, however they seem to have some issues against the passing game, which is not a good weakness to have against a team like Arizona State. Arizona State 30 Stanford 24